The traditional festival “Lithuania at Raudondvaris Manor”, which presents the most beautiful moments, is waiting for you again this year! On July 5-6, let’s celebrate State Day together!

8 p.m. the ensemble “Lietuva” will perform the program “Best Lithuanian Folk”. 9 p.m. together we will sing the National Anthem.

All events are FREE. 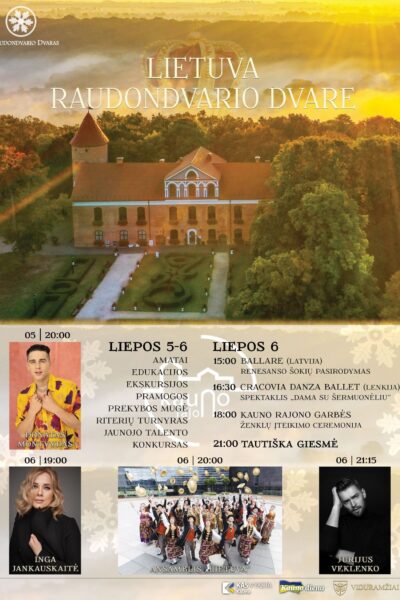 Lithuania is well-known for its complex multipart songs, earthshaking Polkas, authentic shepherds‘ instruments or eye-catching patterns on bright national costumes. It reaches a peak when thousands of artists get in one place and all together present spectacular performances at the massive traditional Song and Dance Festival.

What if we prove that? Get ready to explore the exclusive Lithuanian dance and music world! Choosing the “Best Lithuanian Folk” program is the most eligible way to the beauty of our national culture and the pride of the ensemble LIETUVA. It has gained global recognition and won several international awards over the years.

“Best Lithuanian Folk” is considered a classic ensemble program which contains the most impressive ensemble dances, Lithuanian multipart songs, witty humorous chants and virtuoso instrumental compositions. This is such a unique phenomenon of art that most of the traditions are included in the list of UNESCO’s Intangible Cultural Heritage. Chamber version of dance movements, singing techniques and the spirit of the ensemble will remind the reason why UNESCO has proclaimed the tradition of the Song and Dance Celebration as a Masterpiece of the Oral and Intangible Heritage of Humanity.

Performer composition: a folk instrument orchestra of 8-12 artists, a chorus of 8 to 16 singers, 4 to 8 pair of dancers